4 Fibromyalgia, Those Who Can’t Do…

I am a man — an outdoorsman — with fibromyalgia: I love backpacking, wilderness survival, biking, hunting, archery, farming, medieval re-enactment, forest management, building a home. Fibromyalgia has changed my life and identity; at the same time, it removed many of those things which I formerly used to do to relieve stress and anxiety. Over time I have learned to redefine myself and find new ways to feel useful and capable, but it has not been easy. 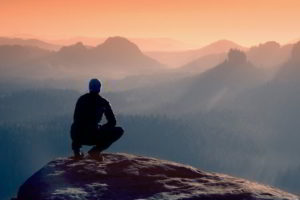 When I first started developing my condition, I did not know what it was. I just knew that I could not do what I used to and it frightened me. I mentioned to a doctor that I was taking 2400 mg of Ibuprofen a day to keep moving. She said, “Well, we all get older.” “Ma’am, I’m twenty-two.”

I skipped most of high school, started my own business after graduating college early, worked hard, played hard. Whenever I am not moving, ask me if I am okay. If anything, I was always pig-headed about pushing too hard. Finishing a five-mile run on a badly sprained ankle cost me most of a season of track—but it just did not hurt that bad. When I am asking for help, warning bells should ring; tell that to the doctors.

Once some of the more severe, visible effects started kicking in, it got easier. “My fingers are a bit swollen today,” I would say, and the doctor’s eyes would bug out. Then they would listen next time I said I was in pain. When they saw my blood pressure, normally a cool ninety over sixty, go up and stay up during a flare, it got a bit more attention. Then, it was tests, tests, and more tests.

After three years of testing, I got a diagnosis—if you could call it that. After eight years, maybe twenty doctors, a broken marriage, a broken business, and a lost home, I am still just fighting a holding action—slowly losing.
During a bad day in winter, I am bound to a wheelchair. On a good day in summer, I can sling hay bales with the best of them. In fact, I have to. I know that the more I do in the summer, the better I can cope with the winter; better muscle tone, cardiovascular fitness, higher morale, means farther to slide when the weather turns cold.

How do I keep from going crazy the rest of the time? I teach. Handcrafts, herbology, archery, survival skills. On bad days, I have people wheel me out to the archery range. I can’t shoot, but I can watch their form, hear the subtle twang of a misfire, or see an underspined arrow fishtail as it leaves the bow. Some days I can shoot; other days I can help. I will tell you: it hurts. It hurts to watch while someone does something you love and cannot do. But it beats sitting at home and feeling sorry for yourself.

Many of the folks I have helped now shoot better than I will ever shoot again. I teach people crafts at every opportunity. My (new) wife and I give talks at the church on disaster preparation and on traditional skills. I write down everything I have learned. As my daughter gets older, I will teach her everything I can. When I was well, one person did the things that I did. Now that I am sick, I watch the skills multiply in others. My illness, in some slight, immeasurable way, has made one small corner of the world better.

It still hurts, but pain with a reason is so much better than pain with none. I sleep a bit better. My wife has to tell me to sit down a little less often. I am not frazzled and grumpy around my young daughter. I still wish I could just pick up a bow or an axe, but I know I make a difference, so I let it be… at least, until it gets a bit warmer.