Never Wanted to go on Disability

If anyone had told me that, at the tender age of 42, I would be diagnosed with an illness no one would understand, leave a terrific career, and be “reclassified” as a disabled person, I would have considered them completely delusional!

But that’s just what happened eight years ago after I finally found a doctor who could put a name to all the symptoms I’d been experiencing. I know you’re all familiar with the list: pain everywhere, mind-numbing fatigue, headaches, and—the worst one for me—the short-term memory loss. My job as an Executive Administrative Assistant for a vice-president of a large telecommunications firm centered on my ability to move at a fast pace, and my “Bambi in the headlights” expression whenever I was asked a question just wasn’t working!

Finally, after struggling for months, I had to face the fact that I couldn’t function in my job.  Making the decision to leave was one of the hardest things I’ve ever had to do. I felt like I was at the top of my game and much too young to retire, and at 42—without twenty years with my company—I was ineligible for retirement benefits. So, I began the journey into the “black hole” of disability benefits.

I thought it would be simple. After all, I’d paid into my company’s short- and long-term plans. I’ll spare all of you the tedious details, but after leaving the job in April of 2001, I didn’t actually receive all of my benefits until the following February. In the meantime, my husband and I went from a comfortable two-income household to one where we struggled to balance the loss of my paycheck and the $400 monthly out-of-pocket expense for my medications.

When I began my disability leave, I was told by my doctor to begin the process to obtain my Social Security Disability Insurance benefits, so I did. Because my job had focused on details and documentation, I started a binder—yes, a binder! I must have had a premonition of some kind. I had one section each for Short-Term, Long-Term and S.S.D.I. I made notes abouteverything! Every fax, every letter, every conversation.

It was a good thing that I was so detail-oriented, because I did really need to keep track of all of the additional doctors’ appointments, X-rays, and tests that the Social Security Administration required, largely due to the ambiguous nature of the illness.

Since there isn’t just one body area affected, they seem to apply a “shotgun” approach of checking everything. After my first denial, I caved and found an attorney who specialized in disability and understood FM. Even with his involvement, I didn’t get any SSDI benefits until May of 2003. Yes, two years later!

I can’t be sure if my situation is typical of the process, but, sadly, I’d bet that it is. My advice to anyone preparing to do battle with the system is to be persistent.  Expect an initial denial, but know that it doesn’t mean the end. Appeal!

It’s the way the game is played. Find an experienced attorney who knows FM. Since they are paid a set fee that comes out of your final settlement (which is retroactive), it pays to have help. Document everything! I can’t tell you how many times I referred to my almighty binder (which actually turned into a two-volume set!).

Victoria Wray-Moss has a twenty-five year background in various levels of office management and most recently worked as an Exec. Admin. Assist. with a Fortune 100 telecommunications firm.  She is married with a blended family of five grown children and eight grandchildren. Victoria resides in Redlands, CA. 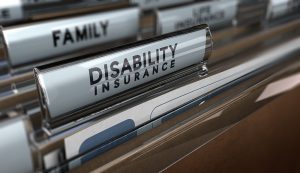